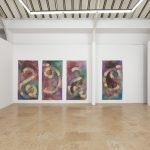 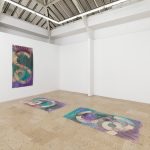 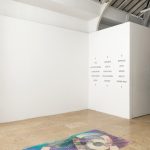 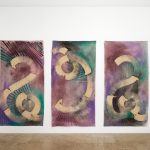 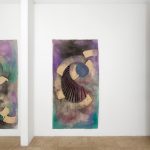 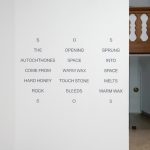 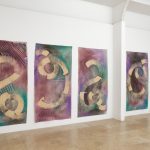 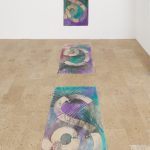 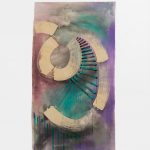 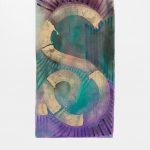 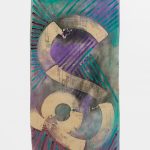 We hope you can join. Masks required, thank you.

The Snake Paintings are an evolution of a sequence in the earlier film works Stone Throat 2011 and Moon Burn / Moon Wave 2019 in which the reflection of a small stained glass hoop is snaking across volcanic rock.

The motion of the reflected glass led to the making of three stained glass snakes, their form coming directly from imagining a line drawn between three hoops. The Snake Painting series is a continuation of the former motif and motion explored through painting with liquid beeswax.

The use of wax followed time spent in Zennor, Cornwall at a studio close to the coastal site where I made a series of Sea Paintings, for Tate St Ives. Here there were bee hives and I began thinking about the bees and their beeswax, this brought back a memory of making batik as a kid.

The process of Snake Painting is a kind of repetition in movement, gradually the broken line of painted wax which flowed to create the snake motif, appears static in one sense whilst being made of sections of visible motion. The wax a solid object melted to a liquid to be painted on canvas. The wax creates a negative space through its resistance to other layers of colour, leaving a transparent yellow form before being removed with heat. In this case a kind of ghost image trace is embedded in the canvas once the surface wax is removed, to reveal a serpentine line emerging. JW