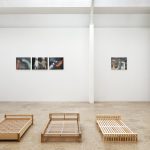 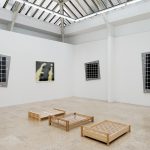 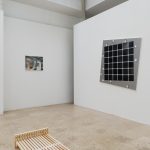 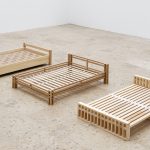 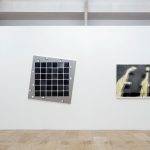 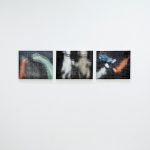 The dinosaur paintings are based on close-up photographs of toys, painted on bubble-wrap plastic and subsequently pressed against canvas twice or three times. With no existing visual observation of the animal’s appearance, every image of a dinosaur stands in succession of artistic impressions going back to the mid-19th century, when its image and category was first initiated. In a trail of archeology and paleontology the image of the dinosaur appeals to the imaginary of origins but has its rendition mandated by a dramatized and realist imperative. It is a relief to believe that dinosaurs are still free from totemic claim. They’ll probably never have their place in any horoscope. You can make them smaller, or BIGGER. As much as they are considered to represent the idea of extinction, they actually embody resurrection. Staged in social gatherings they’re not quite the school of Athens but they do look like philosophers in debate.

One bed is designed in a modernist style of the Arts and Crafts movement, a second one is Neoclassicist, a third one can be deemed Protestant. As scaled reproductions they appear as the offspring or legacy of beds and their designs. Not completing the bed with a miniature mattress and pillow, puts the focus with the structural solutions and variety that carries comfort and leisure.

Balls bouncing round the scintillating grid mimic the nervous appearance and disappearance of the phantom dots, like eyeballs looking for their missing pupils. A variety of the mating dance; an optical trading dance, like recently, when I found myself in the hospital for eye surgery. Before the operation, the eye doctor asked if I was worried. “Yes, of course,” I said, “I’m a visual artist; I make a living from my eyes.”