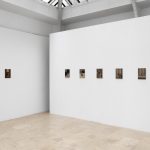 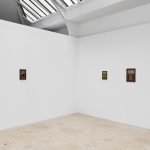 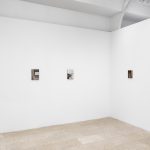 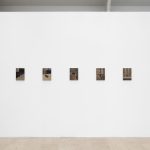 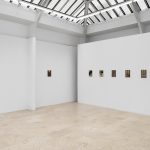 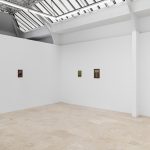 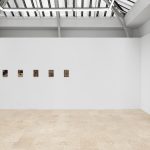 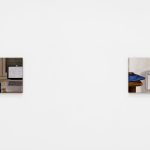 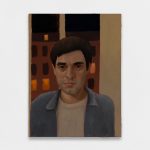 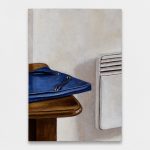 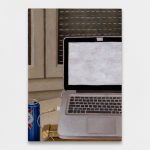 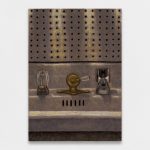 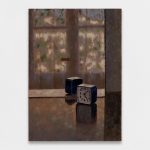 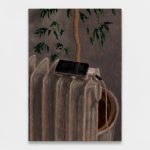 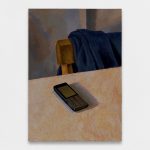 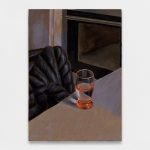 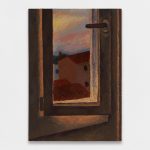 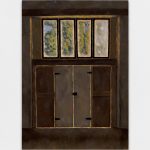 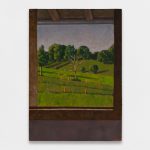 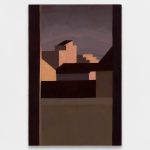 I know Matthieu Palud’s paintings. Every morning, two of them look at me while I collect my thoughts in the living room.

In the first: the simplified outline of a woman who is a bit melancholy, or just meditative, which makes me think of Jean-Michel Sanejouand’s Calligraphies d’humeur. The figure is superimposed over two realistically-rendered tears coming from closed eyes that float like clouds on a vague, orangey background—the representation of a 50€ bill, perhaps.

In the second, a subject uses the bright screen of a laptop like a knife to cut three grimacing slices of sausage, falling into a toilet bowl.

These two canvases fit the state of waking up, as if painting could capture this moment of indecision, this passage between everyday life and dreaming.

They are part of a series that I have somewhat clumsily dubbed the “psyche” period.
At that time, things took place late, in parties. That is where I met Matthieu: in an apartment, among a group of artists who had met up in the Paris night.

One day, I visited Matthieu, who had just moved into his studio at the Cité des arts, next to the Seine. At this moment, a mutual friend had just left—the end of an era. Something was floating in the air, like an announcement, a notification, as if time was now spent in other less festive ways, in solitude. That day, he had prepared a stew for me. While it was simmering, he showed me, almost embarrassed, a thick stack of Canson sheets, used, but carefully arranged on his desk. It was from the same group of sketches, the repetition of a hand on dozens—hundreds?—of sheets of paper.

End of “la période vache”.
I understood that the execution of paintings was slowing down. The work became more repetitive, laborious.
I knew at that moment that I would not see Matthieu as often anymore.

Some time later, he returned to Perpignan, the city where he was born. He explained to me over the telephone that he often had to start paintings over again. I had the chance to show two astonishing pink paintings, from slightly earlier, in Norway, portraits of Jeanne… I likewise heard of very dark paintings, almost obscure. I think that Matthieu destroyed a lot during this time, that he was constantly starting over. I don’t know if these works still exist. I would have liked to see them, I have often imagined them.

In wintertime, Matthieu lived in a seaside city on the Mediterranean with Jeanne. I imagine them often, painting at their home, in a town deserted by summer.

Then I saw his paintings reappear, a few months ago, at Tonus in Paris. Many things had changed.

The return to order of painting in the inter-war period has long been criticized: the abandonment of expressionism and deconstruction in favor of drawing, mimesis, restraint – without understanding that classicism, sometimes, is a suspension that precedes catastrophe, a calm containing all the storms.

During the vernissage at Tonus, Matthieu told me: “You know, in fact, I think that there isn’t any difference between what I’m painting today and the old period.”

I think he is right.

A blue briefcase on a varnished table, near an electric radiator.

The paintings are inhabited by insignificant signifiers, superimposed on each other. Certainly, the groupings are more realistic than the “psyche” period, but they are just as mysterious. What is more incongruous than banality, what is more opaque than a moment, than a reflection?

Then, when you come a bit closer, all that is left is painting.

Translated from the original text in French

With the support of